The mini cakes in the picture which are less than 2cm in diameter each were the creations of Sumi Ito aka “with ink.”, who is a crochet artist.

“A cute item can bring a little happiness to your life.”
With this concept, Ito has created crocheted works. Isn’t it great that she depicts a little lovely world by using just a hook and yarn?

The base of each blueberry and strawberry cake was crocheted in the same way by #0 lace hook*) with #20 lace thread. Attaching a metal part, it can be used in many ways such as a cell phone strap, key chain or purse charm. It can also be a pendant with a long chain. Some people use it as an earphone jack/dust plug for their smartphones.

Ito says, “In the mid November, I had an opportunity to exhibit some of my creations at my friend’s booth on ‘Creation & savoir-faire’, the craft show organized by a French craft magazine ‘marie Claire idees’.”

The annual craft showcase in Paris, which is open to the public, is a really fun event. The event site where craft lovers get together from all over France is filled with excitement. Among many crafters at this time, Ito’s sophisticated and charming productions impressed many in Paris. They excitedly asked Ito a lot of questions on her creations.
Thus, Ito’s cute items gave a little happiness to people in France.

For details about her experience at the event, you can get from her blog at http://plaza.rakuten.co.jp/withink/ 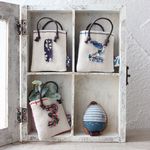 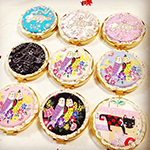