The fourth series from nunokara, a fabric collection based on delightful fairy tales, feature Peter Pan, The Emperor’s New Clothes and Three Little Pigs. Chihiro Hiromi, an illustrator, is the designer of this new series. Shiomi says, “Bearing the story book in mind, I carefully set up the characters. These characters become alive to take you to the story’s next sequence, or provoke your imaginative perspective….These are the feelings I hope you will encounter through these fabrics. When drawing, I cherished the warm colors and lines that can only be created through hand drawing.” “This design was done with the inclination to squeeze my favorite story, Peter Pan, into a piece of fabric. Whether you are familiar with the story or not, I hope everyone will end up having a similar story of Neverland through this fabric.” (Shiomi) Attention to the Emperor dressed in all different kinds of outfits! According to Shiomi, “In the original story, the emperor is described as a comical character who is deceived by evil con artists. Here, the emperor is a fashion loving, stylish, cute, pop, impossible-to-hate, lovable character. Look at the faces of the Emperor’s servants carefully. Their expressions look blank and it makes you think that they want to say something to the Emperor, but they can’t.” This fabric has a whimsical overall design with three little pigs dancing around atop a hand drawn gingham check background. Shiomi says, “I will teach you how to tell the identical three little pigs apart. The oldest who built the straw house is wearing a border pattern outfit. The one in a pair of striped pants is the second brother who made the house out of wood. The youngest, the builder of the brick house, is wearing a patchwork vest. Please also give loving attention to a kind-hearted wolf who wants to make friends with the three brothers.” 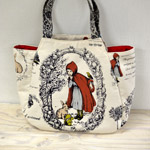 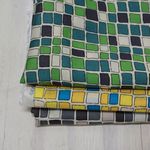 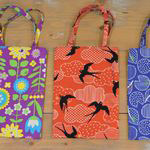